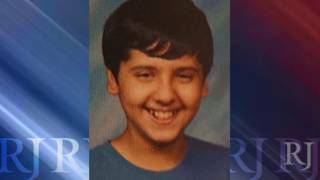 
1. A man was booked on a murder charge after a teen was shot during an attempted robbery at a smoke shop. Police say a smoke shop employee shot and killed 13-year-old Fabriccio Patti when he and two other teens entered the smoke shop wearing masks with the possible intent to rob the store. It‚Äôs still unclear if the teens were armed or demanded any money from the store.
2. According to a letter sent to school district staff, Clark County School District Trustee Kevin Child has been barred from entering schools without a specific invitation from the school administrators. The letter details guidelines for Child‚Äôs visits to ‚Äúensure a safe and respectful working environment‚Äù following numerous complaints regarding Child‚Äôs visits. Specific complaints about Child obtained by the RJ date back to 2013.
3. Prosecutors in a death penalty trial suggest a Las Vegas girl was killed over a $450 dispute. Norman Belcher is currently on trial for killing 15-year-old Alexus Postorino during a home invasion in December 2010. Belcher had texted Postorino‚Äôs father threatening messages about a drug debt he felt he was owed in the days prior to the girl‚Äôs death.
reviewjournal.com

Trump And The GOP Go 0-38 In Post-Election Lawsuits

By Sean S. Thompson. Nevada News® and NevadaNews.com® are Registered Trademarks with the USPTO.GOV
© 2021 All Rights Reserved. Nevada News® | Privacy Policy | Terms and Service
We use cookies on our website to give you the most relevant experience by remembering your preferences and repeat visits. By clicking “Accept”, you consent to the use of ALL the cookies.
Cookie settingsACCEPT
Manage consent

This website uses cookies to improve your experience while you navigate through the website. Out of these, the cookies that are categorized as necessary are stored on your browser as they are essential for the working of basic functionalities of the website. We also use third-party cookies that help us analyze and understand how you use this website. These cookies will be stored in your browser only with your consent. You also have the option to opt-out of these cookies. But opting out of some of these cookies may affect your browsing experience.
Necessary Always Enabled

Any cookies that may not be particularly necessary for the website to function and is used specifically to collect user personal data via analytics, ads, other embedded contents are termed as non-necessary cookies. It is mandatory to procure user consent prior to running these cookies on your website.